From the Pastor's Desk

How can I magnify Christ in myself? How can I imitate God’s generosity?

Today’s readings are all about our sense of justice and the extravagant grace of a merciful God. While God is both just and merciful, God’s mercy often seems, in our view, to override His justice, as God pardons us unconditionally and rewards us generously by opening Heaven for the Gentiles and the Jews.

In the first reading, the prophet Isaiah reminds the exiles in Babylon that their God is more merciful than they are, and more forgiving. He is ready to pardon their infidelity to God, which has resulted in their exile. Their merciful God will bless them with material and spiritual blessings. Hence, Isaiah exhorts them, and us, to seek the Lord and to put aside evil ways that we may receive His mercy and forgiveness.

Today’s Responsorial Psalm (Ps 145) reminds us that, although “the Lord is just in all His ways,” He is at the same time (and without contradiction), “gracious and merciful.”

In the second reading, Paul offers himself as an example of total submission, aided by God’s grace, to His will. Paul is ready to live continuing his mission, or to die and join the Lord, whichever is God’s will.

In today’s Gospel, Jesus tells us the strange parable of a landowner who hired laborers at five different times during the course of one day to work in his vineyard, but paid the same living wage for a full day’s work to all of them. This story presents God (the landlord), Whose love and generosity to all of us demonstrates the difference between God's perspective and ours. God looks at us, sees our needs and meets those needs generously and mercifully. His provisions for our spiritual lives will never run out, and when we share our blessings with others, we tap into the inexhaustible Divine supply. The parable also shows the mercy, compassion, and generosity of a gracious and forgiving God in allowing the later-called Gentiles as well the first-called Jews, His Chosen People, to enjoy the same eternal bliss of His Heavenly Kingdom 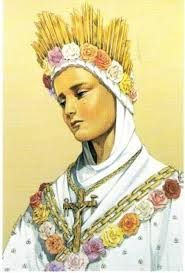 On Saturday afternoon, Sept. 19, 1846, two children — Maximin Guiraud (age 11) and Melanie Calvat (age 14) — were tending sheep for their employers near La Salette in the French Alps. The effects of the French Revolution which had terrorized the Church, the blood spilt during the reign of Napoleon, the increasing secularization of social thought and the rising political turmoil enveloping Europe had taken a serious toll on the faith of the people. In the parish of La Salette, fewer and fewer people attended Mass and the sacraments were neglected. Cursing had overtaken praying; licentiousness, purity; and greed and self-indulgence, piety and sacrifice

Melanie, one of eight children, came from a poor family and began working at age 7. She had no schooling, knew only bits of the Catechism, infrequently attended Mass, and could hardly recite the Our Father or the Hail Mary. Similarly, Maximin, whose mother had died and who did not like his stepmother, had little religious education and no schooling.

While they were tending their sheep, they saw a brilliant light, brighter than the sun. As they approached, they noticed a “Beautiful Lady” seated on a rock and crying, with her face in her hands. In tears, she stood and spoke to them in their local French dialect. She wore a headdress topped by a lucent crown with a band of roses, a dress with beams of light and slippers edged with roses. Around her neck hung a golden crucifix: on one end of the cross beam was a hammer and nails, and on the other, a pincher. Over her shoulders was a heavy chain.

Msgr. John S. Kennedy gives the following version of the dialogue that ensued. (See “The Lady in Tears,” in A Woman Clothed with the Sun.) She said, “Come to me, my children. Do not be afraid. I am here to tell something of the greatest importance.”

She continued, “If my people will not obey, I shall be compelled to lose my Son’s arm. It is so heavy, so pressing that I can no longer restrain it. How long I have suffered for you! If my Son is not to cast you off, I am obliged to entreat Him without ceasing. But you take not the least notice of that. No matter how well you pray in the future, no matter how well you act, you will never be able to make up to me what I have endured for your sake.

“I have appointed you six days for working. The seventh I have reserved for myself. And no one will give it to me. This it is which causes the weight of my Son’s arm to be crushing. The cart drivers cannot swear without bringing in my Son’s name. These are the two things which make my Son’s arms so burdensome. “If the harvest is spoiled, it is your own fault. I warned you last year by means of the potatoes. You paid no heed. Quite the reverse, when you discovered that the potatoes had rotted, you swore, you abused my Son’s name. They will continue to rot, and by Christmas this year there will be none left.

“If you have grain, it will do no good to sow it, for what you sow the beasts will devour, and any part of it that springs up will crumble into dust when you thresh it. “A great famine is coming. But before that happens, the children under seven years of age will be seized with trembling and die in their parent’s arms. The grownups will pay for their sins by hunger. The grapes will rot, and the walnuts will turn bad.”

Truly a sobering message. Then Our Lady said, “If people are converted, the rocks will become piles of wheat, and it will be found that the potatoes have sown themselves.” She then asked the children, “Do you say your prayers well, my children?” “No, we hardly say them at all,” they mumbled. “Ah, my children, it is very important to say them, at night and in the morning. When you don’t have time, at least say an Our Father and a Hail Mary. And when you can, say more.”

Our Lady then returned to her chastisement of the people: “Only a few rather old women go to Mass in the summer. All the rest work every Sunday throughout the summer. And in winter, when they don’t know what to do with themselves, they go to Mass only to poke fun at religion. During Lent they flock to the butcher shops, like dogs.” She concluded saying, “My children, you will make this known to all my people.” She then walked away, up a steep path, and disappeared in a bright light.

The children repeated the story to each of their employers. When the people ascertained that the stories matched, and several pious people concluded this had been an apparition of the Blessed Mother, the children were sent to the parish priest of La Salette. The priest recounted the children’s story at Mass. The government officials began an investigation and the children maintained their story despite threats of imprisonment. Once when investigating the site, someone broke off a piece of the rock on which Our Lady had sat; a spring of water emerged in a place that was dry except for when the snows were melting. The spring flowed steadily and abundantly. Some of the water was given to a woman suffering from a long-term serious illness; she drank a little of the water each day as she prayed a novena and on the ninth day , she was cured.

The case was then submitted to Bishop Bruillard of Grenoble, who initiated a thorough investigation of the apparition. Meanwhile, more miraculous cures occurred. The greatest miracle was truly spiritual: people attended Mass faithfully and confessed regularly. They stopped working on Sundays and they returned to living a pious and devotional life. Pilgrimages to the site became increasingly popular. Five years later, on September 19, 1851, Bishop Bruillard determined that the apparition “bore in itself all the marks of truth and that the faithful are justified in believing it to be certain and indubitable.” A real conversion had taken place.

The following year, a new religious community was founded, the Missionaries of La Salette. Also, Bishop Bruillard laid the cornerstone for a new basilica. Pilgrims increasingly visited the site of the apparition, and Our Lady was referred to as “Reconcilatrix of sinners.” Great saints have been devoted to Our Lady of La Salette, including St. John Bosco, St. John Vianney and St. Madeleine Sophie Barat.

As we ponder this apparition, the message of our Blessed Mother is as pertinent now as then: How many people forsake Sunday Mass but take time for the newspaper, sports or shopping? How many have not been to confession in years? How many use our Lord’s name as a common profanity? How many fails to pray each day? How many entertain such blasphemies as The da Vinci Code? Oh yes, the message still resounds. The world and each of us is in need of conversion. Let us turn to Our Lady of La Salette and offer her Memorare:

“Remember, Our Lady of La Salette, true mother of Sorrows, the tears you shed for us on Calvary. Remember also the care you have taken to keep us faithful to Christ, your Son. Having done so much for your children, you will not now abandon us. Comforted by this consoling thought, we come to you pleading, despite our infidelities and ingratitude. Virgin of Reconciliation do not reject our prayers, but intercede for us, obtain for us the grace to love Jesus above all else. May we console you by living a holy life and so come to share the eternal life Christ gained by His cross. Amen.”

Due to the ongoing Covid-19 Coronavirus Pandemic, Bishop Larry Silva extends the dispensation from the obligation to attend Sunday Mass to all the people of the Diocese of Honolulu and all visitors to the Diocese of Honolulu through October 31, 2020. All who are able to attend Sunday Mass without putting themselves or others at serious risk of infection; are encouraged to do so, but are not obliged to

For School Year 2020-2021, some changes will be taking place in the classroom size. Attendance to the Classes will be limited to adhere to the social distancing mandate. Available Classes will be for those children who are preparing or in need of receiving the following sacraments: Reconciliation, Confirmation and Communion.

It's easy, it's safe,
it's convenient!